Lagarde and Merkel at HHL Graduation in Leipzig

by Eva Echterhoff | January 30, 2020
The Managing Director of the International Monetary Fund (IMF) and nominated President of the European Central Bank Christine Lagarde held the laudatio for German Chancellor Angela Merkel when she was awarded an honorary doctorate from HHL Leipzig Graduate School of Management.

Two of the world’s most influential women spoke at the graduation ceremony on August 31, 2019

The Managing Director of the International Monetary Fund (IMF) and nominated President of the European Central Bank Christine Lagarde held the laudatio for German Chancellor Angela Merkel when she was awarded an honorary doctorate from HHL Leipzig Graduate School of Management. HHL confered the degree of Dr. rer. oec. h.c. on Angela Merkel to honor her leadership accomplishments and her resulting impact on management science.

Event as source of inspiration

Prof. Dr. Stephan Stubner, Dean of HHL Leipzig Graduate School of Management: “We are excited to have Ms. Lagarde giving the laudatory address for our future honorary doctor Angela Merkel. Christine Lagarde has influenced the economy of the world in her very unique way. Two of the world’s most influential women will be attending our graduation ceremony and I am certain this event will become a great source of inspiration for our students.”

Date and time of the ceremony announced

The ceremony for 220 graduates from 65 nations took place at the Leipzig Opera House on the morning of August 31, 2019 with over 1,200 attendants.

Raphael Asamer, M.Sc. student, class of 2019: “From my point of view, Christine Lagarde is a person that wants to shape and strengthen the world’s economy. This reflects what we are learning here at HHL – understand the underlying circumstances, critically analyze but realistically assess them and create value for the society out of it.

Having the two most powerful women in the world, Angela Merkel and Christine Lagarde, at our graduation in August is not only a reward for our studies at HHL but also a great honor, which I will remember for a very long time.”

Get to know HHL Read more

HHL Leipzig Graduate School of Management is a university-level private business school with the right to award doctoral and post-doctoral degrees. It was established over 120 years ago on the initiative of Leipzig merchants and continues to follow in this tradition by training tomorrow’s entrepreneurially-minded and sustainably-oriented leaders and entrepreneurs.

HHL was the first private German business school to be accredited by AACSB (Association to Advance Collegiate Schools of Business) in 2004 and was able to renew this status for the fourth time just recently. The Stifterverband für die Deutsche Wissenschaft ranked HHL as the best university for entrepreneurship in Germany for the fourth time in a row in 2018.

Over the last 20 years, HHL graduates have founded more than 280 startup businesses which have created over 20,000 jobs.

Prof. Ulf Schirmer, Manager and General Director of Music of the Leipzig Opera, is also delighted that the nominated ECB President Lagarde agreed to give the laudatory speech for Angela Merkel. “Christine Lagarde is an exceptional woman who is able to really impact the world’s financial markets. I am deeply impressed by her work and demeanor and I look forward to welcoming her to the Leipzig Opera.”

The internationally renowned Gewandhaus Orchestra will perform pieces by Richard Wagner and Johannes Brahms during the graduation ceremony to honor the Federal Chancellor.

The HHL Graduation Ceremony 2019 took place on Saturday, August 31, at 9 am (CEST) and can be rewatched via the HHL Youtube channel or by clicking on the video below. 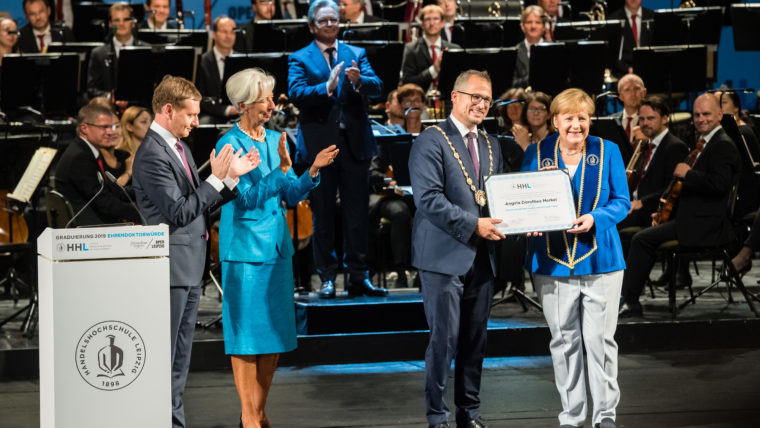 An agenda for the HHL Graduation Ceremony 2019 can be downloaded here. Further information about HHL is available here.