by Sigrid Fischer | January 02, 2023
In the summer term 2022, four HHL students were able to shape the future of a Bundesliga club and get a glimpse into professional sports as part of a student consulting project at the Chair of Accounting and Auditing of Prof. Dr. Henning Zülch.

Four HHL students shape the future of a Bundesliga club

In the summer term 2022, four HHL students were able to shape the future of a Bundesliga club and get a glimpse into professional sports: as part of a student consulting project at the Chair of Accounting and Auditing of Prof. Dr. Henning Zülch, the students not only assessed the main drivers in professional football within a three months assignment but also jointly collaborated with the club’s management to develop dedicated measures on how the club can respond to these trends accordingly.

Club culture and commercial business don’t contradict each other in the football industry if understood as coherent success factors.

Compared to other leading football competitions, the Bundesliga has always been considered relatively solid in terms of financial success until the impact of COVID-19 revealed the economic fragility of the entire industry. A sound understanding of the changing market environment and value drivers enables club managements to tap into new revenue streams while maintaining their authenticity and considering the values and interests of their supporters.

Current examples in practice show: Not every commercial measure is supported by the fans but can, as in the case of the engagement of Qatar Airways at the German champion FC Bayern Munich, deepen the rifts between club management and its other stakeholders. In this potential field of trade-off, the student team developed practical measures that not only accelerate the commercial success of their partner club but are also tailored to the individual club culture that considers other stakeholder interests.

Conclusion of the student team

Management teams of Bundesliga clubs benefit from a compass for evaluating the subtrends in global football to align their own club in a future-oriented, crisis-resistant manner and to exploit growth fields efficiently. In this context, the opportunities in digitalization, communication via social media channels and the increasing public pressure to meet sustainability criteria play a critical role that no club manager can permanently ignore.

In this HHL Expert Talk, Prof. Dr. Henning Zülch discussed the status quo of German club football, hypothesized where German clubs are headed financially after the pandemic fog has cleared and proposed possible solutions to avoid playing second fiddle in international competition in the coming years. 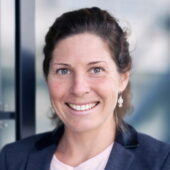 Hi, I am Sigrid, the Director of Career and Alumni Relations at HHL. With more than 13 years of experience in coaching, motivational training and communication in the US, the UK and Germany, it is my core interest to enhance a lifelong career and network guidance for the entire HHL community. I am keen to empower our community to aim high, to nourish lifelong connections and to foster each other's personal and professional development. This ambition is also rooted in my experiences as a former competitive athlete and graduate of a Master's program in Performance Psychology (M.Sc.) at the University of Edinburgh.