Four Different CEO Types and How To Deal With Them

by Prof. Dr. Henning Zülch | August 17, 2022
Knowing which kind of CEO type you're dealing with can be very helpful. We explain how to classify and interact with leaders.

This article was first published on manager magazin (in German).

Financial communication can be simple, as long as leaders apply some basic rules: clarity, consistency, decision relevance and authenticity. However, if we look at the prefaces to annual reports signed (and allegedly written) by CEOs, one may doubt their professionalism. Do CEOs write to please, or does their communication style match with the goals and values of the firm – or at least their personal ones? There is a legitimate reason to doubt.

Do leaders actually mean what they say?

Based on a collaborative study by Kirchhoff Consult, HHL Leipzig Graduate School of Management and Precire Technologies, it has been shown that CEOs’ tone impacts capital market estimates. The study examines all prefaces published with the annual reports of DAX companies from 2015 to 2017. A corporate or personal identity is seldom found to be reflected in CEO communication, i.e. a similar language profile over the years. Instead, profiles are found to often change over the years – even in firms without changes in the CEO position.

Consequently, many firms lack an internally consistent profile or tone from the top. Sometimes, prefaces may even appear contradictory to brand identities or publicly promoted firm philosophies. This leaves readers confused: is a given CEO in touch with his or her own firm? Is he or she able to adequately fill his or her role as its major figurehead? On a side note: the examined CEO letters were all signed by male CEOs. Jennifer Morgan is the first female CEO since her appointment to Co-Chair SAP’s management board in 2019 (see FAZ, Oct-11, 2019).

Companies are not fully aware of how their communication may actually be perceived.

The fact that such questions are being asked is a sign of missing credibility in the corporate leader and the firm itself. However, companies are not fully aware of how their communication may actually be perceived. Specifically, they underestimate the power of artificial intelligence (AI) to reveal such apparent deficits in the external presentation as well as its underlying structures.

Today, sophisticated tools for computational linguistics are able to identify complex patterns in written or spoken forms of language. They enable researchers, journalists, analysts and others to pin down speakers’ (or writers’) communication strategies, to see through them, discount them or develop other counter-strategies against them. In the mentioned study, the interdisciplinary team managed to reveal four types of images that CEOs often create in their prefaces – and how much of them are actually credible. So, here they are: The four CEO types!

In order to understand the future significance of AI in financial communication, it is necessary to understand how CEOs position themselves in the prefaces of DAX companies’ annual reports. In a study conducted by HHL Leipzig Graduate School of Management in cooperation with Kirchhoff Consult, four different CEO types and their communicative profiles were identified:

Check out other articles from our HHL blog about #leadership

What CEOs need to be aware of

Whichever CEO types are represented, it often has nothing to do with his or her personal character. Astonishingly, year by year, the communication focus and attributes in CEO communication change, making it difficult to constantly typecast DAX leaders in their respective ‘roles’ they played in the previous year. Is this due to the inconsistent leadership style of the German CEO types or are their speechwriters just incapable of creating a consistent profile for them?

These are the questions that will be at the center of the discussion concerning the authenticity and credibility of companies. Given the increasing importance of AI analysis tools and their influence on capital market decisions, it is therefore essential for capital market-oriented companies to pay more attention to the effect of their CEOs’ preface (and their public appearances) and to give them a distinct and consistent communication profile that represents them in an authentic and credible manner. Most importantly, the profile should embody the values of the company.

It is that simple! 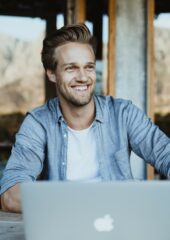 Want to discover more about our top tier and innovative Master in Management and MBA programs?  Dive deeper into the program structure, learn more about career development and networking at HHL. Get your free brochure here!

Henning Zülch is the holder of the Chair of Accounting and Auditing at Germany’s leading business school HHL Leipzig Graduate School of Management. He has published over 300 journal articles in the fields of international accounting and financial communication. In addition, he is the Academic Director of the annual contest „Investors‘ Darling“, carried out together with manager magazin.