by Eva Echterhoff | February 03, 2020
Hiltrud Werner, the Member of the Board of Volkswagen AG, embodies contrasts that have hardly been considered compatible until today. For the 2nd Leipzig Leadership Talk, she sat down with Professor Timo Meynhardt and a rapt audience to discuss her own personal path against the background of an East German biography.

Born in East Germany. Female. Board member of a DAX-listed company. Does that even work?

Hiltrud Werner, the Member of the Board of Volkswagen AG who is responsible for ‘Integrity and Legal Affairs’, embodies contrasts that have hardly been considered compatible until today. The facts speak for themselves, “There are only four East Germans on the boards of the 30 DAX-listed companies —and three of them are female.” (ZEIT im Osten no. 33/2018).

Female Board Member of a DAX-listed company

For the 2nd Leipzig Leadership Talk, she sat down with Professor Timo Meynhardt and a rapt audience to discuss her own personal path against the background of an East German biography; what drove her and what experiences she had along the way. In front of more than 150 entrepreneurs, executives from the region, HHL professors, members of staff and students, the 52-year-old talked very openly about her roots, life and career, her career in auditing and what advice she would give to young female managers.

Because I Want to.

Because I Do Not Compare Myself All the Time.”

Hiltrud Werner grew up with two older brothers and three younger sisters in a Christian home in Thuringia and completed her studies with a degree in economics in Halle/Saale in 1989, the year the wall came down. Like many others, she chose a career path in West Germany and eventually made it all the way up to the top-level management of Volkswagen.

Being an East German and a mother who worked full time, she felt more “like a rare species at the zoo” during her first years in Munich. She commented that, as a woman, you always have to do more to earn respect. With a smirk, she talked about how, before a board meeting at MAN in South America, she was told, “Hiltrud, please wear trousers. They are not used to skirts in the boardroom.” Hiltrud Werner attributes her success to a simple formula, “Because I can.”

You have to be confident, not be thrown off by mistakes and also fail and get back up again. One thing is certain: “Failure is not a permanent situation and many exceptional personalities had to learn to fail.”

Listen to your inner voice

Hiltrud Werner, who loves to wear pink and has a truck driver’s license, inspired the audience during her presentation and the subsequent talk particularly with her great authenticity and disarming clarity. Instead of pursuing remote goals and planning out her career, she is driven by her interests and by settings in which she can really make a difference.

As a department head at BMW Bank GmbH, she discovered the field of auditing, learned the ropes of a new subject and developed a concept to transform auditing into an appreciated department. In 2016, she became head of Group Audit at Volkswagen AG and was appointed to the Group Board of Management in 2017 where she is responsible for the “Integrity and Legal Affairs” department. Hiltrud Werner says, “I knew I could help.”

“You have to get used to promoting an average woman from time to time. There are enough average men in leadership positions as it is.”

Seek opportunities that match your interests

She always made important career decisions rather quickly without being distracted by possible alternatives. “You shouldn’t look to the left and right that much, not compare too much, but listen to your inner voice.” A professional decision which has a person changing into positions that does not pay as much or comes with less responsibility can also be right.

She is unacquainted with planned out careers and rather employs outsiders with breaks in their résumés, especially if this person sees them as an opportunity as well. The deciding aspect is if someone really wants something and goes their own way.

Prejudice against women is a decision against tolerance

Hiltrud Werner considers prejudice against women to be principally a decision against tolerance. Being responsible for integrity and legal affairs at VW, she also deals with the topic of diversity and is currently exchanging views with the world’s leading research institutions in gender studies to see “if I am overlooking something.”

The wife and mother of two children does not speak about work-life balance. She says, “It was always all lumped together.” She has very down-to-earth advice for her colleagues: “You have to get used to promoting an average woman from time to time. There are enough average men in leadership positions as it is.”

Power allows you to take responsibility

The will to lead is part of it for Hiltrud Werner. “I like leading, shaping, taking responsibility. Power is something positive for me.” Before every single meeting, she asks herself three questions:“What is the goal? What do I want to know? What do I want to achieve?” She is certain that more people have the potential for a top-level position and encourages everyone.

“Don’t let anyone scare you off … If I can’t do it straight away — others make mistakes, too.” But she also knows that “becoming a leader means, first and foremost, loving people.” Those who can’t or don’t want to do that, should stay away from leadership positions.

Role model for an understanding of leadership

After this Leadership Talk, it was clear for Professor Timo Meynhardt (Photo above on the right): “Mrs. Werner’s life journey is impressive. What is even more remarkable, however, is the way in which she tackles challenges, driven by her inner conviction, and leads towards success with humanity and entrepreneurial spirit — entirely in line with the Leipzig Leadership Model.

This makes Mrs. Werner a role model, not just for people from East Germany and women, but generally for an understanding of leadership in which apparent contradictions come together as a whole and accommodate a complex world. What is keeping all of this together? Accessibility, a down-to-earth nature and positive energy.”

Hiltrud Werner and the LLM 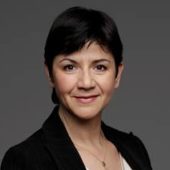